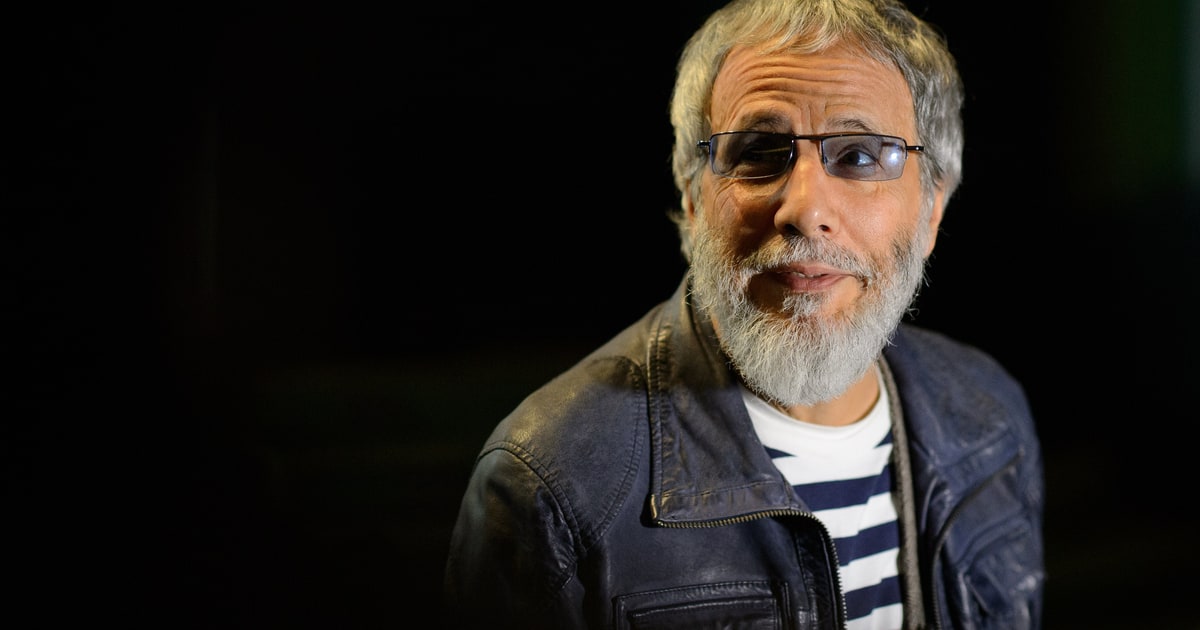 1963
rstevens 1 10 Years and 10 Questions with Yusuf / Cat StevensAt the age of 15, your father bought you your first instrument, a guitar for £8. I believe you were originally inspired by acts like The Beatles and Bob Dylan but also by listening from your family’s rooftop to the musicals of the adjacent theater district. How did these disparate types of music come together to influence you as a young songwriter, and how has your relationship to a guitar shifted over the years?

My first school was just off Drury Lane, in the heartland of clubs, cinemas and theatres, so musicals were a big influence on my background — as well as Greek weddings, of course. Tin Pan Alley was round the corner, full of guitar and instrument shops. When The Beatles arrived, I was already a fan of Buddy Holly and Little Richard. I bought my first guitar for £8, an Italian make called Eko. It made the right noises. Folk and blues became my initial repertoire, but I started to make my own music rather early on; it was much easier than trying to learn and decipher the complex chords and lyrics others made. My second guitar was a 12-string Hagstrom, influenced by Huddy Leadbetter (Leadbelly). It sounded like an orchestra. Things really changed and my songwriting took a leap when I laid my hands on a black Gibson, Everly Brothers J-180.

By 1968, you had already achieved quite a bit of acclaim and released legendary songs like “The First Cut Is the Deepest” and “Here Comes My Baby”. Not much later, you contracted a particularly rough case of tuberculosis, as a result of the stresses of burgeoning fame, touring, and recording. What was it like to have those songs reach farther around the world as you fought such a personal battle, and how did your health scare change your perspective?

Writing a hit song was important in those early years. “First Cut Is the Deepest” was intended for Otis Redding, before my producer, Mike Hurst, gave it to P.P. Arnold. “Here Comes My Baby” was a complete Xmas-party take on an originally sad song. But these brought a lot of attention to my songwriting skills. Unfortunately, I too started engaging in an “endless” party, spending most of my good health on drinking, smoking, and late nights. I got struck down with tuberculosis. Suddenly, finding myself flat on my back in a hospital bed surrounded by doctors and nurses, I asked myself a lot of important questions: “What if I died? What would happen to me then?” My friend Paul Ryan had given me a copy of a Buddhist book called The Secret Path. That was the beginning of my search for explanations.

Mona Bone Jakon and Tea for the Tillerman both were recorded and released in 1970. You had always been prolific, but that’s quite the achievement, especially considering some of the beautiful songs on those albums. What was happening at that time in your life that you felt such a creative burst? What inspired you most and resulted in that creative peak?

After I came out of convalescence, I had grown a beard and had started writing music again. My esoteric studies infused a new spirit and deeper levels of insight into my songwriting. A lot of my songs were now much more personal and reflective. I wasn’t going for “hits.” All I wanted was to let my music become the vehicle for my journey. Ideas for songs were coming from every direction, fired by my inner desire to reach the highest state of being. Paul Samwell-Smith brought an uncluttered approach to the production of those recordings, dominated by a six-string guitar. My words exposed a naked, childlike openness and willingness to learn.

Your most famous recordings all have incredibly iconic artwork, including the melancholic and beautiful Teaser and the Firecat. When you hear titles like “Peace Train”, an illustration — somehow whimsical and innocent, yet also brimming with nuance and complexity, like the song — immediately comes to mind. People don’t always know that those illustrations were yours. How does your art background impact your records and songwriting, and how do the two creative disciplines differ for you?

My ability to create pictures never went away with music; I simply transposed them into songs with stories. Iconic images, such as “Peace Train”, “Moonshadow”, and “Morning Has Broken” still remain as vivid expressions of my landscapes and colours. I wanted to be an artist — a cartoonist, more like. So when I was able to combine my music with my art by painting the covers of my albums, it was a dream job. As a medium, art is much slower and takes longer to make an impact. Music is instantaneous. It also employs our imagination, which creates more possibilities for the brain to unlock valuable emotion and insights.

The story of your near-drowning in 1976 and the wave that saved you is absolutely terrifying, inspiring, and amazing. Was that the beginning of your gradual spiritual journey towards Islam and exit from the music industry in 1979, or had the seeds already been laid? With your experience and knowledge now, do you think it would have been possible to pursue a life as both a Muslim and working musician back then?

I always believed in the existence of a Supreme Being, since my early spiritual feelings in Christianity. Buddhism enabled me to get rid of a lot of accumulated superstitions and remove the limitation of four walls of a temple in order to experience a sense of sacredness. But that day out in the Pacific Ocean, I forgot everything I knew in this world and renewed my relationship with Him in the form of a lifelong commitment. Human beings have the contemptible ability to conveniently forget things they promise, but I didn’t: When I received the Qur’an as a birthday present about six months later — without consciously linking these two events — I was given the chance to fulfill mine. Also, it was the first Divine Scripture I’d ever come across which seemed to be inclusive; it actually mentioned the existence and names of other religions and their links to revelation and primordial “Oneness.” It explained, more than any other, the Nature of the Divine Self, through the Ninety-Nine Names of God.

After you auctioned off your guitars and left the music world, you poured your energies into your faith, family, education, and philanthropy, making powerful strides in improving the lives of so many. During this time, did you miss music or the creative process? Did you completely stop writing or playing music, or did you merely refrain from doing so as a consumable product for others?

I have written a short book called Why I Still Carry a Guitar, which goes some way in explaining what went on in those years of apparent “silence.” But the answer to this question is actually quite complex. It was a combination of many things, including my weariness with the music business at the time, as well as doubts about the place of music in my new life, as a new Muslim, coming from a very strict quarter of conservatism within the Muslim community. Idolatry also was pretty much obliterated with the arrival of Islam, and separating the aesthetic activity of music from the culture of star-worship was another factor. However, my creativity didn’t go away and I ended up starting a whole new genre of music and songs for Muslim kids.

In 2004, you won the Man of Peace Award of the World Summit of Nobel Peace Laureates. The year prior, I was lucky enough to see you perform as part of the 46664 concert honoring Nelson Mandela, in my hometown of Cape Town, South Africa. Was the ability to spread your message of peace and effort to highlight other such peaceful people what drew you back to performing?

In a word: Yes. My song “Peace Train” was not an accident in the book of Destiny; as far as I’m concerned, fate had already written it. Music has the ability to overarch politics and treacherous trenches of war. The Religion of Islam I discovered was quite separate from most of the killing and chaos we see selected as “newsworthy” by the great judges sitting up in those white, puffy clouds in editorial-land. It’s my hope that the media would try to focus more attention on the spiritual centre of Islam, which the vast majority adhere to, and let people see the truer picture. The name Islam actually comes from the word “salam,” meaning “Peace.” It’s partly why I am back making music again, to help bridge the lack of that kind of information.

Though you’d begun to make small steps back into the music world, you fully returned with An Other Cup. How did you feel when making that change? Were there any expectations as to what response you would receive from your audience? Did your use of a new name come into mind as part of that conversation?

In 2006, I released An Other Cup, after 27 years of musical retreat. The title was a subtle reference to Tea for the Tillerman. Indirectly I was saying: “Well, if you liked the first cup, maybe you’ll like another.” It certainly was a pleasant surprise to many ears, although criticisms came from some small sections of the Muslim community who had quite incredibly assumed that because I was making music I had left Islam — God forbid! The truth was that I had purposefully re-opened a bridge for me to cross and approach my friends and admirers of old, those whom I left stranded in 1979 and who had no other link to Islam except me, and perhaps Muhammad Ali, the boxer. Most other famous Muslims were politicians, tyrants, or terrorists! I chose to limit my name to Yusuf, in order for my critics not to accuse me of misusing the name of Islam, and also because it was more personal.

In 2012, you added to your already extensive list of accomplishments in the music world with the release of Moonshadow, a musical soundtracked by selections taken from throughout your career. What was it like to take that retrospective look at your career and life? Did that process have an impact on you personally?

“Maybe There’s a World” was one of the new songs written for my musical, Moonshadow. I got together with a director from Sweden, and we put on a few workshops in London with a handful of actors and singers. It was a metaphorical adventure, a journey out of this world on a faraway planet called Alaylia, a place of perpetual night where only a solitary moon shone free. One young man has a dream of finding the land of the lost sun. I suppose it was a stretch of an idea based on my personal pilgrimage of discovery.

The Laughing Apple will mark the 50th anniversary of your debut album, but also will clearly be its own artistic statement rather than merely relying on the past. Songs like “Blackness of the Night”, your earliest protest song, can easily speak to the contemporary refugee crises, so how does this album relate to your legacy and catalog while also continuing to push forward?

Sometimes we need to stop, step back, and learn from history in order to progress. My musical catalog contains many songs yet-unfulfilled, especially those I recorded in the ‘60s. Though I had a bag full of new songs, the older ones still sounded relative. The childlike character of the album emerged organically as — one by one — I began to pick them out of my dusty trunk of songs. They are now fresh again, like the shiny, red smiling apple on the cover.