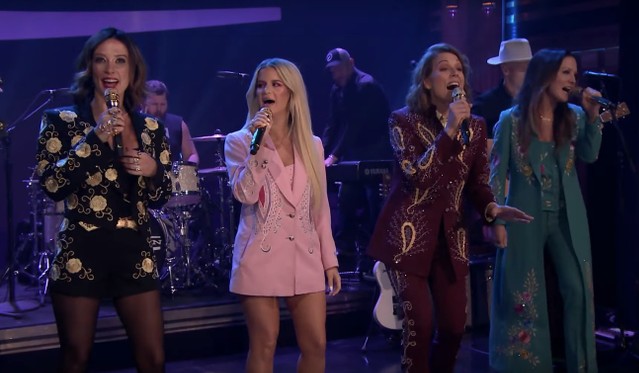 HighWomen (Brandi Carlile, Amanda Shires, Maren Morris and Natalie Hemby) with Sheryl Crow, Jason Isbell, and Yola perform “Highwoman” Live at Newport Folk Festival, July 27, 2019. "Highwoman" is a 2019 version of the song "Highwayman".
"Highwayman" was written and recorded by American singer-songwriter Jimmy Webb in 1977. According to Wikipedia, the original version is "about a soul with incarnations in four different places in time and history: as a highwayman, a sailor, a construction worker on the Hoover Dam, and finally as a captain of a starship. The song was influenced by the real-life hanged highwayman Jonathan Wild. The dam builder verse alludes to the deaths of over one hundred men during the construction of Hoover Dam near Boulder City, Nevada. Jimmy Webb first recorded the song on his 1977 album "El Mirage". The following year, Glen Campbell recorded his version, which was released on his 1979 album "Highwayman". In 1985, the song became the inspiration for the naming of the supergroup the Highwaymen, which featured Johnny Cash, Waylon Jennings, Willie Nelson, and Kris Kristofferson. Their first album, "Highwayman", became a number one platinum-selling album, and their version of the song went to number one on the Hot Country Songs Billboard chart in a 20-week run."

The Highwaymen's version of "Highwayman" earned Webb a Grammy Award for Best Country Song in 1986. It also earned the Highwaymen (the band -- Waylon, Johnny, Willie and Kris) the award for Single of the Year from the Academy of Country Music in 1985